100 years ago, women were given the right to vote and stand for office. Processions 2018 a beautiful walking art exhibition celebrated just that. Many women, girls, those who identified as women or non-binary (I even spotted a few male supporters) came together to walk from Green Park station to Parliament to support, record and exhibit their banners. Report by NAOMI GAHIE for Engage London 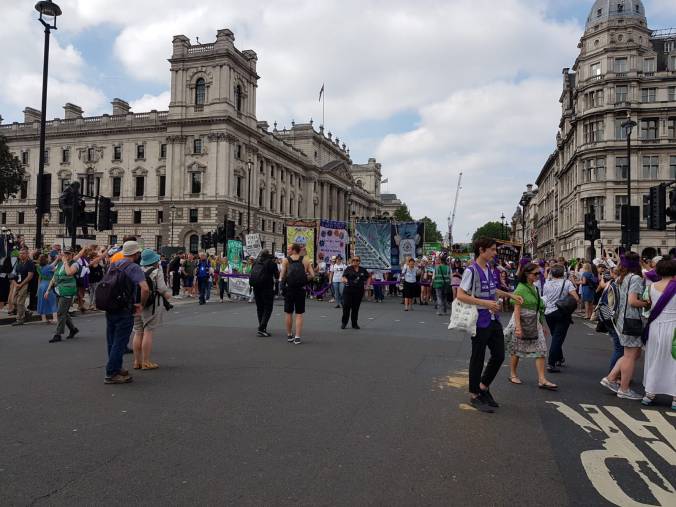 A sea of marchers at Processions where everyone wore Green, White or Violet banners (the Suffragettes code for Give Women Votes). (c) Pilion Trust/Dolores Steadman

Exiting Green Park station my eyes were instantly drawn to colour green, purple and white everywhere I turned; the colour for the Suffragettes. The sight of hundreds of women, banners, chanting, battle crying, dancing and most importantly smiling in celebration of an event that changed the life for women in the UK was incredible.

The aura emitted from the participants was infectious, you could feel the love, the injustice of more that was to be resolved, the celebration of the accomplishments to date, it was impossible to not smile, join in the chants and at times have a little boogie to the music around.

Still Not Good Enough – the fab banner Naomi Gahie (R) and friends at Pilion Trust created to join the Processions March across London on 10 June to celebrate 100 years of (some) women having the vote. (c) Pilion Trust/Dolores Steadman

Our banner for the march zoned in or 4 points our group had decided they wanted to draw attention to:

Our chosen slogan at the front of our banner “STILL NOT GOOD ENOUGH”, was chosen to get the message across that although we have come far as a society there is still much inequality that must come to an end hence the “TO BE CONTINUED…” at the back of the banner. 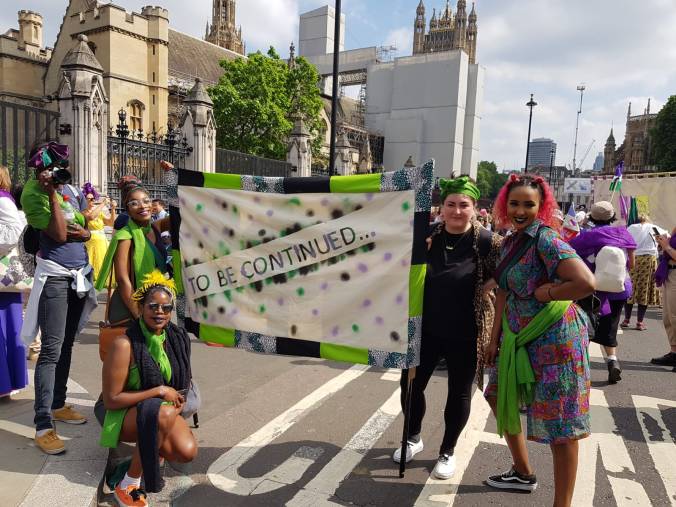 I was bamboozled and humbled to see our banner had sparked conversation by passers-by such as the recent vote to legalise abortion in the Republic of Ireland. I hate to toot my own horn but we were stopped every 5 minutes just so pictures could be taken off our amazingly executed, thought-provoking, eye-catching banner. Too much? Sue me!

There were many groups that really peaked my interest such as a woman dressed in attire from 1918 with a humongous parliament model on top of her head or the colourful “Power to the future” banner an array of colours and three-dimensional flowers and geometric-somethings popping out to bring it to life.

There is nothing I would change about the march, it was such an honour to be part of the event which will remain close to my heart till the day I depart the earth. 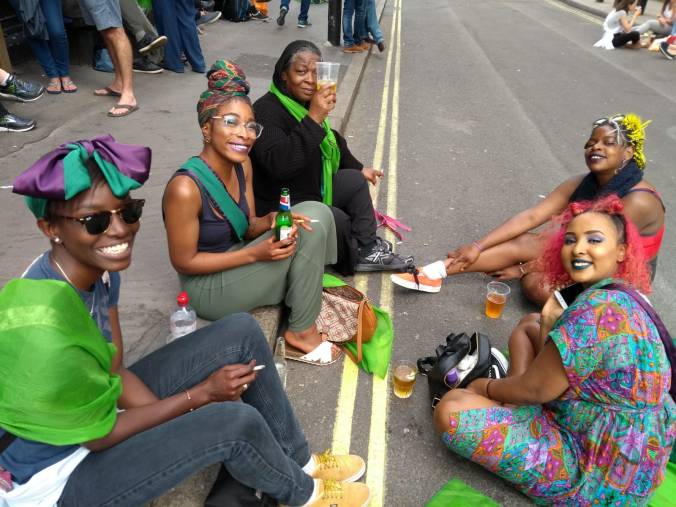 Happy after the Women’s Procession celebration of (some) women getting the vote in 1918. Engage London members Naomi Gahie (2nd from left in green sash) and Fadz Ali (far right in violet sash). (c) Pilion Trust

As a first timer to a march of any sorts, I must admit I was nervous for what I would be expecting, however, that disappeared instantly as soon as I could what I could only describe as love. I can assure you I will be involved in the next Processions march, will you be joining me?