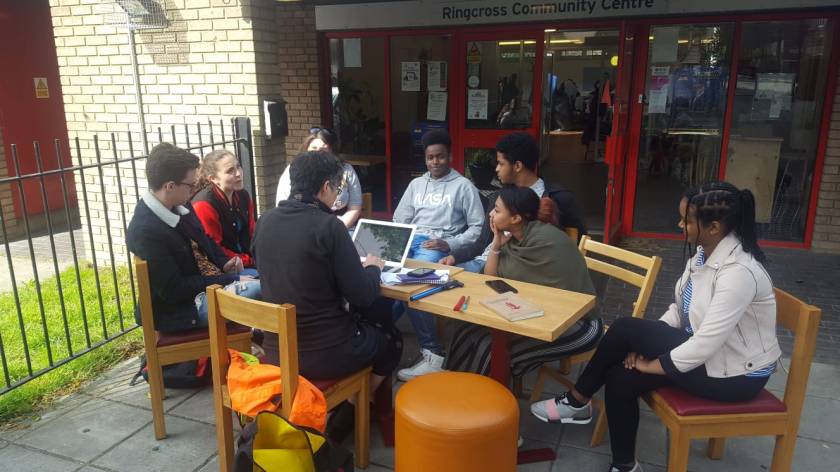 To help all the Engage London team keep up their media-making knowledge after City students’ exams had ended and Pilion Trust young people had moved out of their winter Crashpad accommodation, we arranged a weekly drop-in blogging masterclass at Ringcross Community Centre. Report back from Nicola Baird

Blog workshop 1 – Favour and Brandon, who both hope to go to Brussels, with Romeo discovered basic blog writing conventions including SEO (search engine optimisation) tips or headline choice, why write standfirsts, and the usefulness of the Q&A interview.

Blog workshop 2 – was held out in the sunshine. It led to three City students – Meagan Walker, Diana Serenli and Matt Hardy – running Q&A interviews with current and former Pilion Trust members and

Blog workshop 3
We ran a third blog masterclass on June 12. This time it was a twilight session from 5.30-7pm so the young people with jobs, or on courses, found it easier to reach. Big thanks to them for getting across London on time.  This session saw Favour, Charlie and Naomi – who are all going to Brussels for the Engage Europe meet up – develop their Q&A interviewing (soon to be blog posts). We also discussed the upcoming workshops in Brussels and what we already know about Belgium. It’s count down time…

Workshop 4
We discussed a code of conduct which the young people wrote up. Basically going to the summer school in Brussels needs to be treated as professional work time, and not a holiday. In addition to the workshops we’re all looking forward to frites and mayonnaise, seeing the Grand Place and the famous Manikin Pis, spotting the Art Nouveau buildings and looking for street art and graffiti.

MILESTONE: The Engage London blog had 2000+ views by 20 June. Thank you readers.